What's on your mind?

This is Subaru's Ben 10 Alien costume for Halloween later in October, Swampfire. 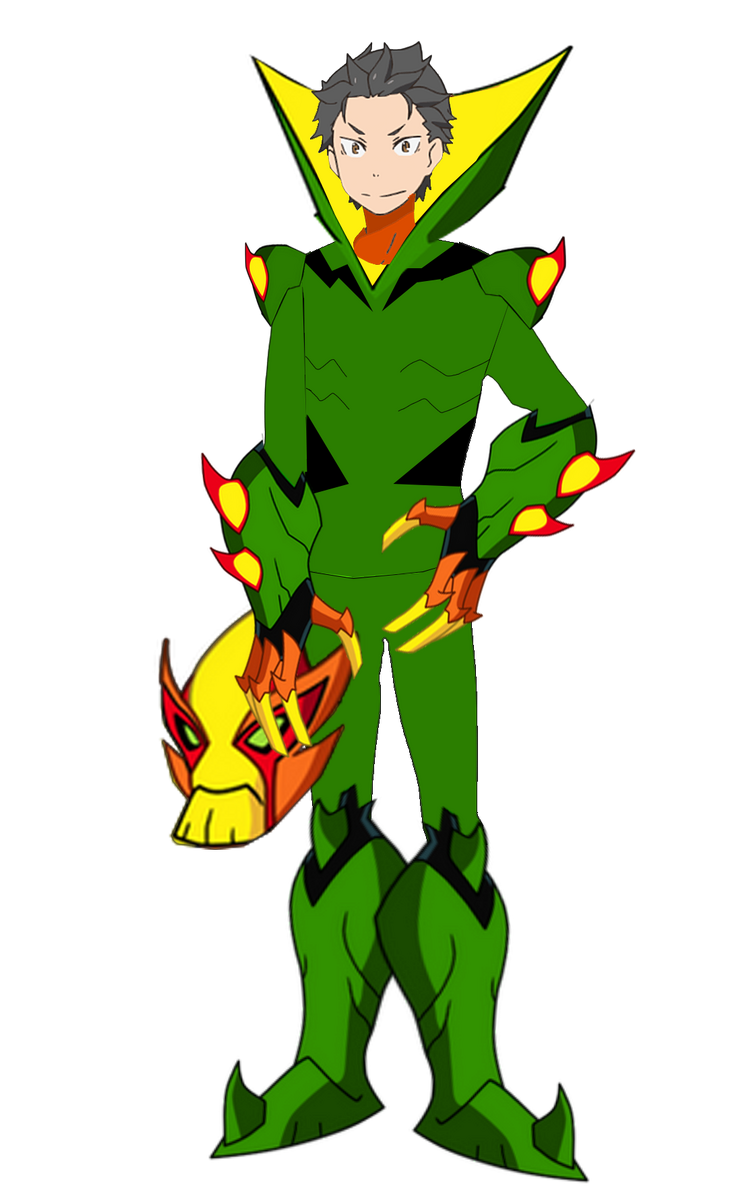 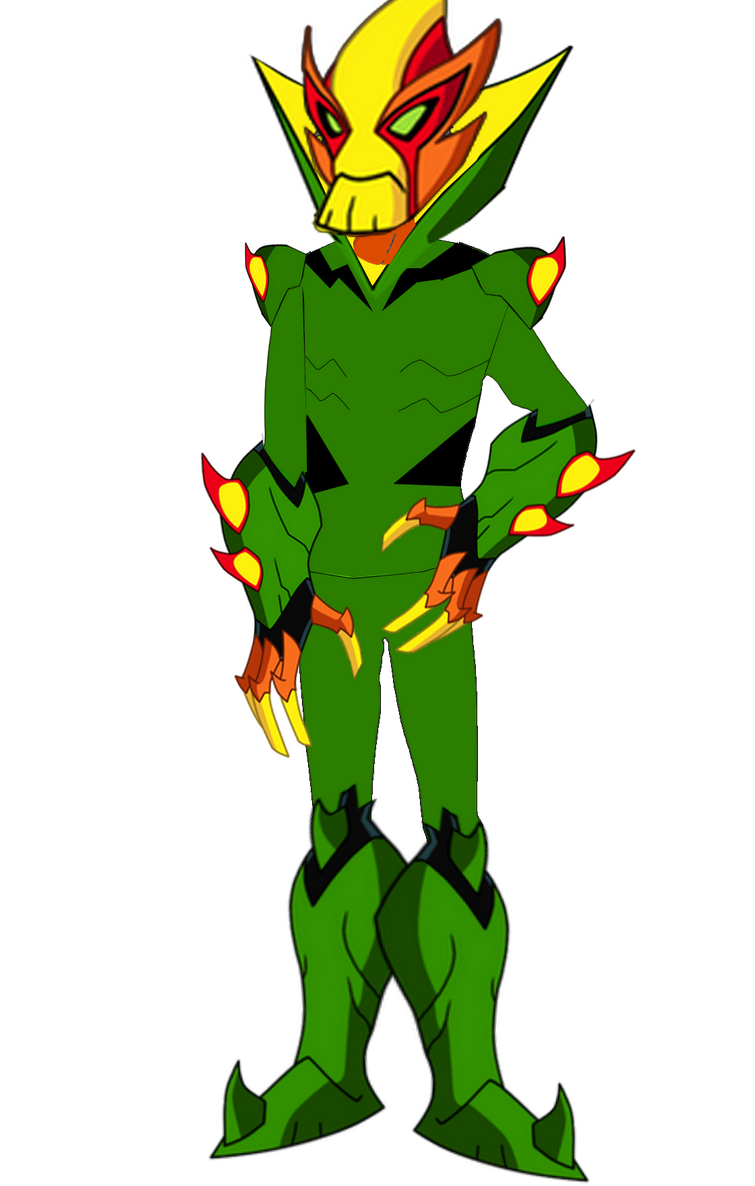 How do you think?

Alec is Hoshin of the Wilderness? What the hell????? As part of Isekai Quartet of all things, goddamn.

And also Subaru is even more likely to be le re:zero Jesus? Man i've been waiting for actual lore development for years now and it all comes to this, not bad for being a hack writer, tappei 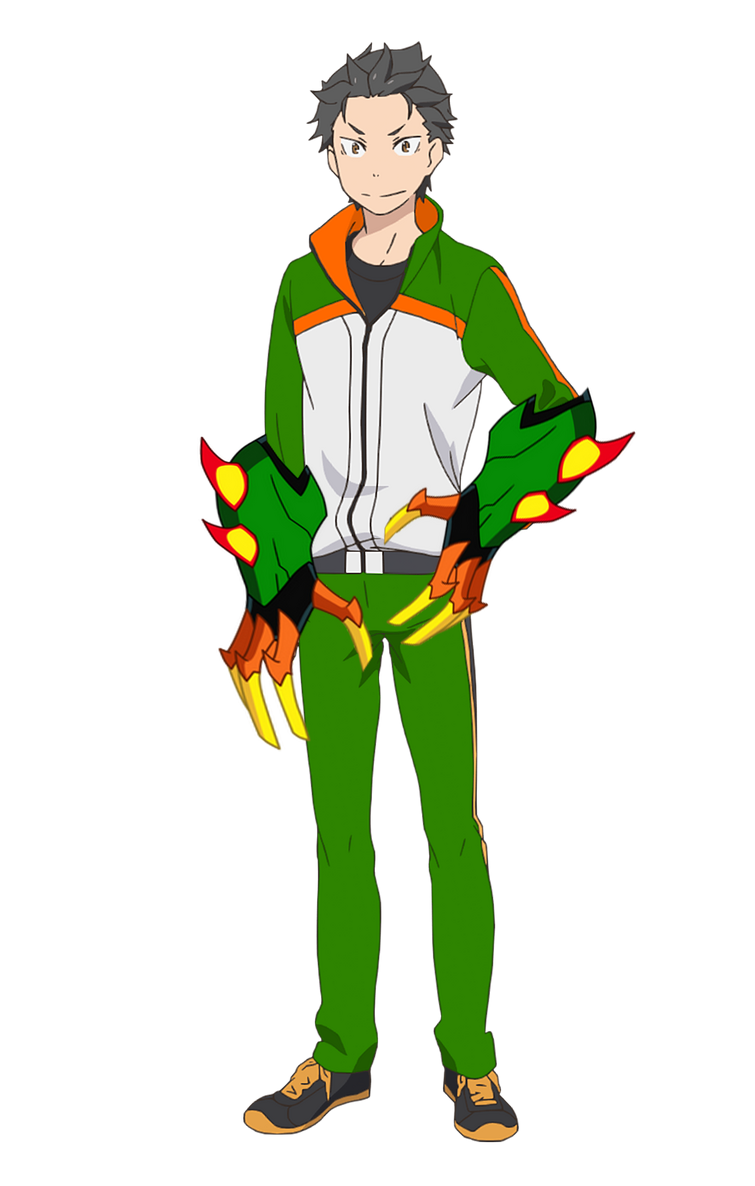 This is Subaru's Swampfire Cosplay. Well, what do you think?

What are the chances of YP licensing the tapenshuu series and the two art books?

Vol. 19 of the English version of the light novel has been delayed once again to July 26. Which also causes Ex Vol 5 release date to be moved from August to September 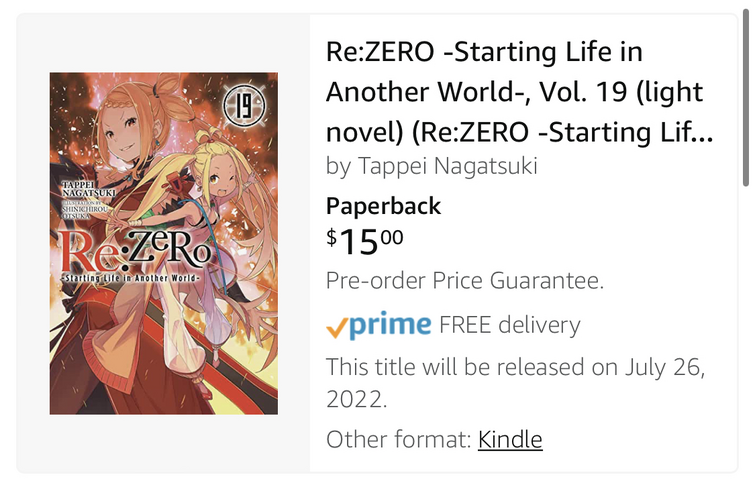 Anybody here have it? 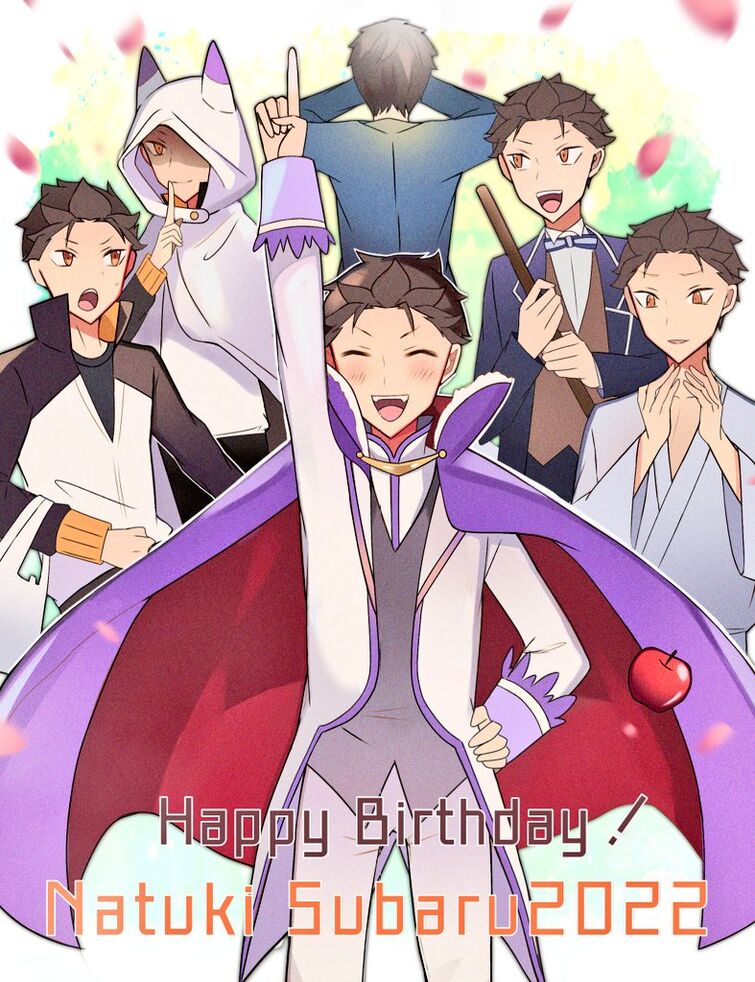 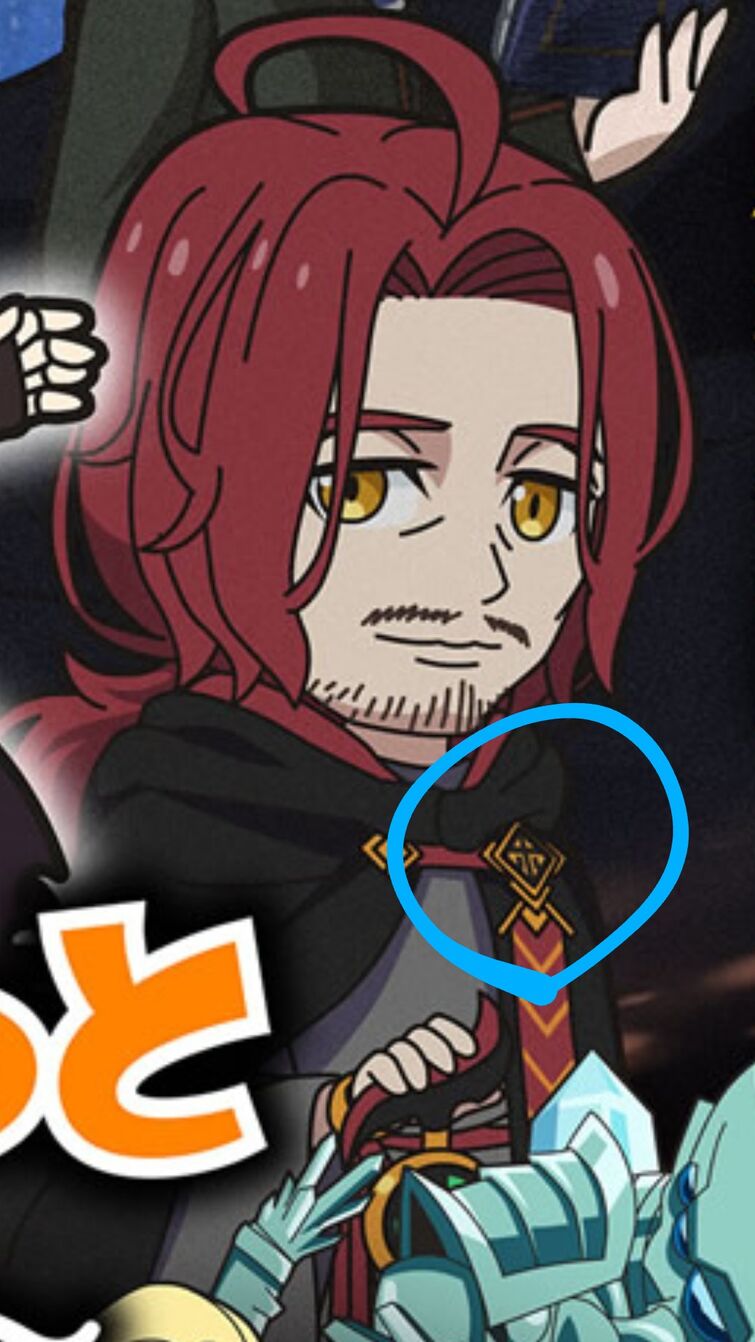 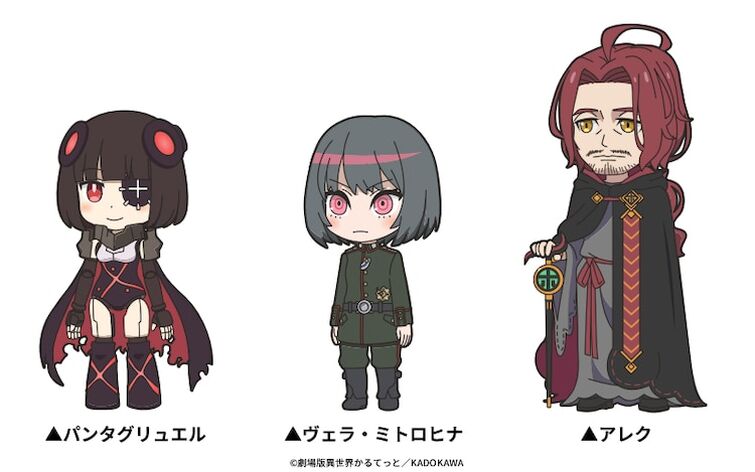 There's a new trailer for the upcoming Isekai Quartet movie, which will be in theaters on June. However, I noticed that out of the 3 new and original that will be appearing in the movie, one has the "Ho", the marking that Anastasia's group wore. Could he be Hoshin of the Wastes?

You all are probably getting tired of this topic, but its still bugging me a little. 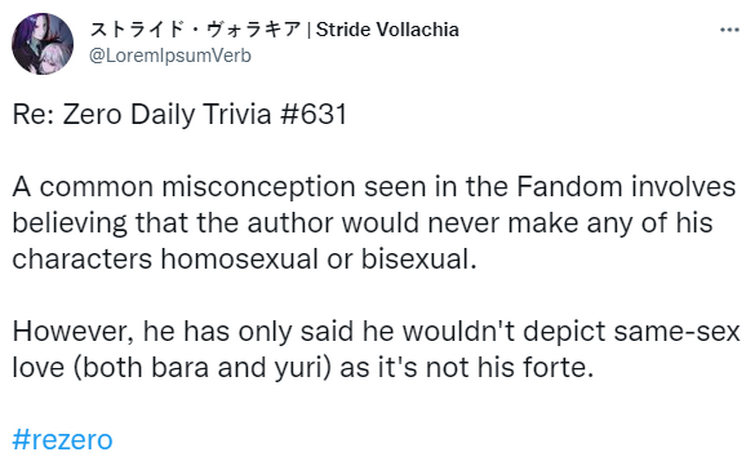 Some of these characters are understandable, like Beli, Clind and Ubilk, but Priscilla and Liliana, I am not too sure.

Again, I apologize for bringing up this topic again, but one side of the argument would be spreading misinformation. If this is canon, like this account says, I feel the wiki needs reflect it.

I wonder if her old personality was a form of gluttony influencing its host, like how Satella isn't the Witch of Envy. I'll call this hypothetical personality aspect Satiation, since Louis represented it.

If Louis was always in the Corridor of Memories, she was never born. So, her being somewhat infantile as her normal personality makes sense. Not to mention her being animal-like.

Plus, she would need to be incompatible with gluttony to form Satiation to begin with. So, her not attacking people to eat them makes sense, too.

Then, Louis is currently the dominant personality, while Satiation is dormant for some reason. Maybe the Louis vs Louis, in the Corridor, tired Satiation out, so Louis is in control, for now.

Though, I'm not sure if creating split persona's is so common.

Didn't think too hard about this, though.

Is there anything that obviously refutes this? Or other thoughts?

I like rereading the story to refresh my memory of events.

Opening his eyes wide in surprise, he couldn’t say anything to Subaru who’d suddenly become enraged. And as he looked Julius keeping his silence, Subaru lowered his finger and shrugged his shoulders,

Subaru: “Don’t make such a despairing face. I know you’re suffering, and I know that you were forgotten and you have nowhere left to go…… But, I’m sorry but I won’t let you show your weak side.”

Subaru: “Have you forgotten, Julius? ――No, do not forget, Julius.”

Subaru glared at Julius whilst he bit his lips in frustration. He placed his hand on his chest, and once again made a declaration like the ones he’d done.

Subaru: “My eyes know your strength. My shame knows it. Even if everyone has forgotten.”

Very similar to how Al scolds Subaru in the recent arc.

I like to see similar scenes, in a single series, because you can compare and contrast them for story elements.

Julius is stuck lamenting without being prepared to move forward after being lost from the world's memories, and simultaneously is shown the absolute severance of ties that he has experienced through forgetting his own brother.

Similarly, Subaru lamented that Rem no longer could think of him as a hero.

Both were stuck and can’t push themselves to move past what is gone.

Julius had to decide that instead of trying to rebuild his relationships, he would newly make those important connections moving forward.

Rem seemed to express that Subaru was always looking at her for the Rem that is no longer here, so she pushes him away as he gives her feelings of confusion and accentuates what she lost. I imagine that Subaru is going to learn to create a new relationship with Rem, like what Julius did with his spirits and Anastasia.

That can definitely work. The early chapters of arc 7 tell us that Rem is still her, but without her memories and baggage. Subaru, then, needs to devote himself to the Rem that is here to build a new relationship, instead of trying to reach and rebuild the relationship that he lost with past Rem.

So the set up and concept is working nicely.

It also lets Subaru and Rem create a new relationship as just friends, as Rem always needed to find a way to open herself to the world around her and love herself. Without an almighty figure like Ram to be a pillar and symbol of what she can never be, Rem is already reaching out to try and be better. So the idea that she is learning to improve her magic is interesting.

This is good for Subaru getting with Emilia.

What’s more, when, or if, Rem's past and current self come together, it will be interesting to see how the self confidence issues she used to have will interact with her new experiences.

I got the impression that Rem had partially gotten so close to Subaru because, growing up, she never had a relationship that wasn’t her being below or disconnected to the other party. Then, Subaru being a kind individual who cared about her, made her feel welcome, was an equal, and made her feel that she could give to him, instead of one-sidedly receiving. This helped build their relationship from her end.

On another note, during arc 6, with Subaru hit by gluttony, he hyped up what he used to be because of how others in the watchtower expected so much from who he used to be. Then, when he caught up to his past, he realized he was only himself, and that instead of chasing his past, he needed to run forward to meet what everyone needed him to be.

For Rem, her current state is so disconnected from where she was that I feel lots of anticipation towards how her past self would connect to her new experiences.

Subaru could find the connection in his states, showing him how little changed in himself. Also, he had memories of his past, to an extent. Whereas Rem can have the opportunity that Ram was looking for, for Rem to value herself and become independent. That would create a new situation where her past and current self might show her how she has changed a lot from who used to be. If she can grow through that, Subaru would be forced to try and focus on Rem as she is. After all, he can’t try to hold on to the past when she had so much pain tied to her past.

I rambled. I wanted to say that I like how Al is Subaru’s foil here while Subaru is a foil to Julius. Also, great job by the author in setting up precedents for how impactful and important these aspects of gluttony’s impact on relationships are, in arc 6, before bringing it back with a character and relationship that we care even more about. Plus, he used the different ways that gluttony can steal memories and the different character backgrounds/types to build unique tension for this newest situation.

Alright, it's been quite a while since I was active on this wiki. I guess I'm now back, but seriously, I have A LOT of arc 7 catch ups to do.

How would he react too it and what would he do? He no longer has to fulfil duties as a guardian of lugnica and his family problems and etc are gone.

Lol. This would be amusing(Reinhard still have all his power and abilities same as when he is luginica)

So, as of chapter 52 of Arc 7, Subaru got his third kiss, don't wanna spoil from whom though ;)