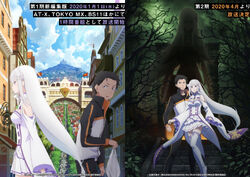 The anime adaptation of Re:Zero is produced by White Fox.

It was announced in 2015, began airing on April 4, 2016 and ended on September 19, 2016, having a total of 25 episodes. The opening and ending themes are Redo and STYX HELIX for the first cour and Paradisus-Paradoxum and Stay Alive for the second cour.

Before the season 2 premiere, a Director's Cut version of season one with hour-long episodes started to air weekly from January 1, 2020. Each episode roughly combines two episodes from Season One into one with some updates to their animation and added content that was not on the initial airing. The Memory Snow OVA was added in the Director's Cut as episode 11.5. On May 27, 2020, the new edition, with the entire season 1 and Memory Snow OVA, became available on Blu-ray and DVD.