Chaosflame (カオスフレーム) also known as the Demon City of Chaosflame (魔都カオスフレーム) is a major city located west of the massive Buddheim Jungle in the Sacred Empire of Vollachia and roughly falls under the eastern half of the nation. It is governed over by the 7th ranking Divine General Yorna Mishigure.

Chaosflame is a large Imperial city located at the very south of the Empire, west of Buddheim Jungle. It got its name as the Demon City, due to a vast variety of different cultures and architectures mixed together as one, making it look like it's in total disarray and chaos. When walking through the city streets, one will find old ruins placed right next to new dazzling buildings, an abundance of tall spires sprouting forth from seemingly random locations, rows of somewhat out-of-place living quarters, lush parks and right next to them, sandy deserted areas reminiscing of long-abandoned parks. Above the streets, one can spot an indescribable mess of wooden scaffoldings that have no apparent purpose and give off a feeling that someone arbitrarily spliced them together and put them up just for show. From a distance, the city looks like it's covered in cobwebs. At the very centre of the city, a large glossy-red castle called Red Lapis Castle can be observed reaching for the clouds, which also happens to be Chaoslame's widely recognised symbol. All around it, the city streets expand in a circular motion, almost reminiscing that of the Capital of Lugnica.

Another thing that would quickly catch the eyes of a visitor, is the abundance of strange races of Demi-Humans. Immediately upon arrival, Subaru and his group were met by a guard belonging to the Monoeye Tribe. A few seconds after, the group was subjected to a variety of individuals; lion, cat, dog, wolf and reptilian-like humans, eight-armed giants, people that looked like simple stone blocks, chimera people who possessed different body parts of different animals, and so on. Unlike in other areas such as in the Kingdom's Capital, these Demi-Humans also do not hide their appearances and are not a subject of ridicule and inferiority. They proudly assert their own species in a melting pot of diversity that is the Demon City of Chaosflame.

Due to the nature of the city and its inhabitants, Chaosflame also does not hold any majorly-limiting laws. According to Vincent, "the place is a city of vices that ridicules the nature of order". The city realistically follows only one order; disorder.

Since ancient times, the city has been known to inhabit a great variety of races, that have lived together chaotically. 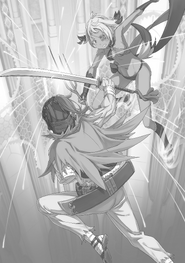