Demon Beasts are rumored to have been created by a witch to wipe out humanity. They eat mana and any Demon Beasts that have their horns broken follow whoever broke it.

In actuality, Demon Beasts were created by Daphne in an attempt to eliminate starvation from the world. Born "somehow" through her mind and feelings, they were made to eat mana so as to not need a habitat or food and were made to grow larger and larger to increase the amount of food they would be able to provide when killed. However, because of these two traits, Demon Beasts became far stronger than Humans, causing them to start targeting Humans themselves.

As they were thought to be attracted to the miasma of witches, Demon Beasts were long thought to have a connection with the Witch Cult, however, Anastasia has pointed out that they actually try to avoid it. The White Whale who is under the control of the Archbishop of Gluttony is the sole exception as the cult's activities are often carried out under its appearance to keep out interference.

The Three Great Demon Beasts (三大魔獣 Sandai Majū) is a title given to three Demon Beasts that caused the most damage to humanity. They are recognized to be a type of disaster and are given special caution when they appear.

The Oousagi (大兎 Ōusagi, "Great Rabbit") are fist-sized white rabbits with long ears. Their main food source is humans, and once they finish eating any creatures in their vicinity, they will begin eating each other while they move around to look for another food source. While they are weak on their own, the number of Oousagi total to the number of water drops in mist, and they will keep on dividing and multiplying unless every last one is killed. Unlike other Demon Beasts, Daphne projected her own sense of starvation onto them, and when Subaru experienced the same sense during his encounter with her, he feverishly began eating his own right arm. The Oousagi was sealed in a different dimension by Beatrice using Al Shamak, however currently no one believes them as no one other than the members of the Emilia Camp saw it happen and Beatrice doesn't have enough mana to recast Al Shamak.

The Kurohebi (黒蛇, "Black Serpent"), originally known as Kokuja in the web novel, is known to plague its victims with a hundred diseases just by touching them, and any ground that it slithers over is cursed, making anything except Demon Beasts unable to live on it. One person that came into contact with its tongue was scarred with reddish black burns, another had their skin from the neck up covered in reddish black spots that gushed black blood, and another had their body dried up to the point that touching them might break their body apart. Its poison was also potent enough that it was capable of having signs of being sentient after being frozen in a lake in Elior Forest. The poison was known as Black Water.

Unlike the Oousagi that can be directed to places and the Hakugei which is under the control of gluttony, the Kurohebi is uncontrollable, obeying no one as it moves from place to place. The Kurohebi is rumored to be a snake, though no information has been given about it. Only a slithering sound has been heard.

The Hakugei (白鯨, "White Whale") infamously called the Demon Beast of the Mist, is a large white whale Demon Beast estimated to be around 50 meters if not larger with skin that is as hard as stone and covered in tiny hairs that scatter mana of incoming magical attacks, dulling their force. The glowing pinkish wheel-ike appendage on its back allows it to fly. It is able to release mist that can cover its surroundings but in truth the mist is actually the mana of the Hakugei that has been modified. There are two types of mist; a mist that the Hakugei swims around in, which is known as the Mist of Mental Contamination (精神汚染の霧 Seishinosen no Kiri) and can also cause an effect similar to mana poisoning, and a second mist dubbed the Mist of Elimination (消滅の霧 Shōmetsu no Kiri), which is capable of erasing victims along with any memories the surroundings have of them, and both are released from the many glands across its body. It can also break the spirits of those unprepared with its roar and when faced with heavy attacks it will spawn clones that will split the original Hakugei's power and weight while the original tries to escape or use the clones as a safer way to defeat its opponents. Lye Batenkaitos claims that he could potentially breed and raise the Hakugei if he was given 400 years to do so. The Hakugei has terrorized the continent for centuries devouring merchants, armies sent to kill it and even whole towns and cities. It finally fell by a combined force of members from the Emilia, Crusch, and Anastasia Camps, with Wilhelm dealing the final blow to avenge his wife.

Wagpig ( Waggupiggu) have round red eyes and jet black skin that's thick and hard like rock. They have a large mouth seemingly capable of swallowing a Giant whole and flat teeth.

Guiltylowe (ギルティラウ Girutirau) have the head of a lion, the torso of a horse or goat, a snake-like tail, and a large body capable of blocking a wide passageway. They are known to be a "boss" like beast, often living deep within forests with a high concentration of mana, with some preferring not to needlessly roar like other Demon Beasts. Contrary to their large stature, they lightly move around, silently killing their prey with one blow to their vitals, and are skilled at ambush and assassination like hunting. They are also known as the Jet Black King of the Forest (森の漆黒の王 Mori no Shikkoku no Ō) and Shadow Lion (影獅子 Kage Shishi).

Wolgarm (ウルガルム Urugarumu), originally known as Juggernaut (ジャガーノート Jagānōto) in the web novel, have black fur, a salivating mouth with razor-sharp teeth, red eyes, and looks like a wolf. They are around one meter in length, weigh 30 to 40 kg, and have a yellow horn on their head. Wolgarm are able to cast a curse on others which enables them to steal mana from a distant target, stealing mana from their victims when they become hungry. A large group of these lived near the Roswaal Mansion, led by Meili Portroute, and one was briefly known as the shaman until it was killed by Subaru and Roswaal L Mathers.

Black Winged Rat (黒翼鼠 Kokuyoku Nezumi) are rats that have black wings and red eyes, making them similar to bats.

Arkalb ( Aakarubu), originally known as Abonsconda (アボンスコンダ Abonsukonda) in the web novel, are snakes with red eyes and a dark body as thick as a human arm.

Snow Blight (雪荒らし Yuki Arashi) are gorilla like demon monkeys (魔猿 Ma En) with yellow eyes and mostly white fur. A horn adorn their forehead. One was shown to get red faced when angry with the blush in its cheeks representing its murderous intent. It had short stubby legs, and arms which were as large as tree trunks that could easily throw large balls of snow for several 100 kilometers.

Snow Blights can manipulate snow with astonishing speed to get rid of its opponents. One method this was exhibited was by making massive snowballs in blazing fast speed to crush its opponents.

A Snow Blight was defeated by Emilia when she decided to use her Flowers of Ice ability to drain its life from it. 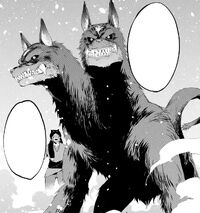 Orthrus (オルトロス Orutorosu) was an enormous Demon Beast, with two canine heads with fangs lining its mouths. The Orthrus had a horn on each of its two heads, which had been broken in two. It stood at around about 4 meters tall, and its body was covered by jet black fur. Its eyes within its two heads are described to be devoid of sanity. It had sharp forefeet pointed like claws that could easily slaughter human beings.

The Orthrus was led by Chap to Elior Forest as he tried to take Emilia prisoner by force.

Banassi ( Benasshi) can change their body size based on their anger level. They leave traps at dead ends and strike the moment their prey becomes careless. They can harass their enemies by inflating themselves until they explode, showering them with their blood and guts. Other Banassi will flock towards the source of the stench and repeat the same process.

Spotted King Dog (斑王犬 Madara-ō Inu) have four legs with sharp claws and thick fur. They have spotted fur and are similar to hyenas, however they are twice as large as humans.

Knickerbocker ( Nikkapokka) are mentioned by the author to have moved into the forest near Roswaal's mansion after the Wolgarm were killed.

Dimril ( Dimuriru) are mentioned by the author to have moved into the forest near Roswaal's mansion after the Wolgarm were killed.

Due to its close proximity to the Witch's Shrine, the Augria Sand Dunes has a high concentration of witch miasma, making it an ideal place for Demon Beasts to live. Demon Beasts that live here are larger than normal, tend to become violent, and some only live in the area.

Ikkakujuu ( Ikkakujū, "Unicorn") are rumored to be an endemic species that live in the Augria Sand Dunes. They have only been mentioned by the bartender in Mirula.

Oiranguma (, "Courtesan Bear") are a bear-shaped Demon Beast originally from Kararagi that have flowers all over their body. They live in flower gardens that exist in certain areas of the Augria Sand Dunes. Oiranguma are two to three feet in length, have short legs in exchange for long arms, black fur, and hook-like claws. The flowers on their bodies are actually parasites that suck moisture and nutrients from their hosts, and any places that don't have any flowers have withered, their faces mummy-like.

Gabaou (, "Hungry Horse King") are an endemic species located underground in the Augria Sand Dunes and are one of the strongest species that live there. They are six to seven meters in length. They are described to be similar to a deformed centaur: they have the body of a horse with a human like torso instead of a head, the human torso in turn has a curved horn growing where the head should be and a mouth stretching vertically from chest to belly, with no eyes, and a cry similar to a Human baby. In exchange for not having sight, their hearing is above average, using echolocation to see their surroundings. The fur on their back is constantly burning and keeps on burning even if it is pulled out, allowing them to launch fireballs at their prey or create weapons for close combat.

Unlike other Demon Beasts, Gabaou are able to regenerate a broken horn, making them unable to be tamed, and can also regenerate any lost body parts in addition to adding limbs or hardening their body, effectively enabling them to make themselves stronger after they meet their opponents. Despite their strength, they were easily defeated by Shaula.

Sunamimizu (, "Sand Earthworm") are an endemic species located in the Augria Sand Dunes, though there are native ones as well, however, the endemic ones are mentioned to be up to several thousand times larger. They have no backbone, no eyes, no arms or legs, and has a body that is made to live under the surface. Their mouths are capable of swallowing four to five people whole at once and have teeth that help distribute saliva that melts their victims.

Hanemogura (羽土竜 "Winged Mole") are an endemic species located in the Augria Sand Dunes. They are covered in something which resembles bird wings, and the greater part of their head has transformed into a horn. Hanemogura can fly and when their horn breaks they die.

Retrieved from "https://rezero.fandom.com/wiki/Demon_Beast?oldid=74234"
Community content is available under CC-BY-SA unless otherwise noted.