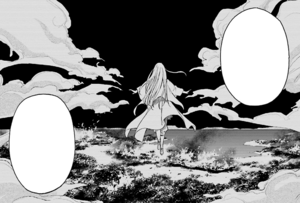 The Great Calamity (大災厄 Daisaiyaku) is the name given to the series of events occurring approximately 400 years before Natsuki Subaru's arrival in the new world, where the Witch of Envy first appears. After untold casualties and destruction, a group, composed of the Sage, his apprentice, the First Sword Saint and the Divine Dragon set forth to end the Witch of Envy's rampage. In the end, the Witch was sealed in eastern Lugnica. It is the paramount event in the Re:Zero world.

The seven Witches of Sin known today were not always witches (Except for Echidna, who was born a Witch), as there have been many others in the past, of which there is very little information about. The Witch Factors that grant the Witches their Authorities are inherited, and as always, inherited abilities require some degree of compatibility with the user to ensure control over their powers. Unfortunately, there came a day when a young half-elf named Satella came in contact with the Witch Factor of Envy with which she was horribly incompatible. As a result, she developed a separate personality as an extension of her authority - the Witch of Envy. Satella attempted to maintain control over her Authority, and for a while she did. In that time she made friends with the other witches, minus the Witch of Greed.

Eventually though, the Witch of Envy overtook Satella and began to lash out, beginning the Great Calamity.

According to records around the time, the Witch of Envy began her rampage by attacking local towns and villages, and then cities, then nearby regions, nations, and soon enough, her rampage had flattened, salted, and scorched half of the world. Naturally, destroying the world did not contribute to Satella and the Witch's reputation, and her name would forever be remembered as the ultimate evil in the world. It is hard to grasp the scale of the destruction, though a good try would be to say it is because there was nothing left to compare the old and the new world to.

Eventually, a group of heroes, not wishing to see the world end, took up the cause to end Satella's reign of destruction once and for all. The heroes, who may or may not have been exclusively Lugnican but ended up associated with the Kingdom anyways, were the Sage, Flugel, his apprentice, Shaula, the first Sword Saint, Reid Astrea, and the Divine Dragon, Volcanica. With their powers combined, they still failed to kill Satella, instead resolving to seal her in the Evil Sealing Stone Shrine within the vast Augria Sand Dunes in the Eastern Desert regions of Lugnica. Satella, virtually immortal, would stay an ever present threat to the world. Foreseeing a possible scenario, Flugel decided to construct the Pleiades Watchtower in order to watch over the entire region to make sure nobody would get remotely close to the location of the sealed witch.

The Sage, arguably the most important figure of the whole ordeal, besides the obvious, decided against taking recognition, granting his achievements to his apprentice and the other members of the group. Though some do believe the Sage had no part in the Great Calamity, it is clear that in Lugnica at least, the Sage is very much recognized for his contribution to saving the world.

In addition, the humans in the world (most notably, citizens of Lugnica) developed a prejudice for Demi-Humans, with Elves being the most persecuted race. This subsequently led to the Demi-Human War, between an alliance compromised of Demi-Humans, and the Kingdom of Lugnica. The Demi-Humans were beaten, and people developed even more prejudice towards their race.