Otto Suwen (オットー・スーウェン) is a merchant. He later joins the Emilia Camp following the events in the Sanctuary and becomes the Head Internal Affairs Official.

Otto has gray hair that is mentioned to be as long as a gal game protagonist. He is said to be somewhat handsome if he has a serious expression. However, he is usually either retorting, shouting, or panicking, ruining his looks. He has a medium build, but has trained himself since he used to work as a merchant.

Otto is generally an unlucky person, first shown when he almost drowned in his first bath, and is said to be born under an unlucky star. When he was young, he was treated as a pitiful child by others due to his Divine Protection, as they thought he was talking to imaginary objects. He is generally on the receiving end of jokes, with some people such as Natsuki Subaru suggesting to use him as a shield, but despite this, he is loved by the others. He is also loyal to his friends, as he helped Subaru in the Sanctuary even though it could've cost him his life.

Otto left his hometown Picoutatte four years before Subaru was summoned to Lugnica.

Divine Protection (加護 Kago): Otto has the Divine Protection of Soul Language (言霊の加護 Kotodama no Kago), which allows him to talk with all sorts of living creatures. However, as he speaks in the language of the creature he's talking with, it makes him look shady to others while he's using it. As Otto can't use it properly, he normally keeps it plugged. 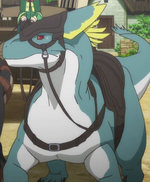 Magic User: Otto is able to use Earth Magic.

Retrieved from "https://rezero.fandom.com/wiki/Otto_Suwen?oldid=74724"
Community content is available under CC-BY-SA unless otherwise noted.