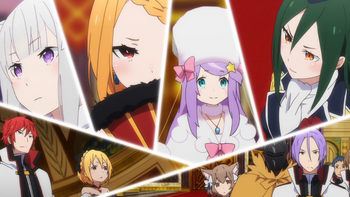 The Royal Selection (王選) is the event to decide who will become the forty-second monarch of the Dragon Kingdom of Lugnica. The elections last for three years, ending one day to the month before the ritual with the Divine Dragon. The five candidates are Emilia, Felt, Priscilla Barielle, Crusch Karsten, and Anastasia Hoshin, all of whom were chosen by the Dragon insignia.

The process of succession for the Lugnica family is entirely unknown, although it is presumed that as a feudal monarchy, the line of succession followed male primogeniture, as all currently known monarchs have been men.

With the demise of the entire Lugnica house as a result of an unknown illness burning through and killing all known members of the family, the remaining government and their institutions were left in a shock. Uncertainty about the pact with the Dragon possibly no longer existing as a result of the line of the pact signatory, Farsale Lugnica going extinct caused nationwide fears about the security of the country. Most notable were the fears that the Sacred Empire of Vollachia, Lugnica's southern neighbor whom the Kingdom had historically warred against, would invade in a time of instability. Though diplomacy eventually settled the issue, uncertainty still held. In desperate need of guidance, the Sage Council, Lugnica's leading governing body, turned to the prophetic Dragon Tablet.

As told by the Dragon Tablet, five candidates referred to as priestesses were to be found across the Kingdom. Their candidacy would be confirmed through the use of the Dragon Insignias, which would gleam red if in the hands of a potential Dragon Maiden. After a year of searching among the 50 million citizens, only four of the five prospective were found. It would only be by accident that the fifth would be found in the slums of the capital city.

It was shortly after the mass die-off of the Lugnica family that the Duchess of the House of Karsten was found to be a suitable royal candidate.

Unique in the directness of her goal, Crusch's stated goal was the ultimate disbanding of the pact with the Dragon in order to create a nation which did not require the aid of a greater being to survive, instead able to defend itself through its own military power and national standing. Though she understands the many contributions of the Dragon to Lugnica's continued prosperity and peace (with the exception of one major civil war of course), Crusch believes in a Lugnica where the citizenry of Lugnica are able to stand up for themselves and rule for their own, as all other options are tantamount to indefinite servitude.

Hailing from the mercantile Kararagi City States, Anastasia Hoshin, owner of the Hoshin Trading Company, was surprised to learn of her eligibility in Lugnica's Royal Selection. Pledged knighthood by Julius Juukulius, and backed by her wealthy company seeking to expand its markets into the Kingdom, Anastasia took to becoming one of the most eccentric of the candidates.

Also direct in her goals, Anastasia's only intentions behind running was her greediness, although this may have just been a naïve play made to bluster the unfamiliar Lugnican nobility. In actuality, she believes that she has legitimate qualities to be a prosperous leader, and points to the success of her trading company as an example. She promises economic prosperity for the country were she to be selected.

Though a child of the 76th emperor of Vollachia, and very much eligible and capable of becoming the ruler of Vollachia, Priscilla found herself betrayed and ousted from her position by a sympathetic general fearing for Priscilla's life in the inevitable civil war that occurs as part of Vollachia's succession process. Eventually ending up in Lugnica's as a result of her famous beauty, she was first married off to influential and elderly men at the age of 12. Perhaps due to her equally famous luck, all of her many husbands would die off soon after marrying her. With the death of her most recent husband, Leip Barielle, a wealthy nobleman with a sizable estate, she inherited all of his feudal lands. Through her luck, she managed to carry her estates to prosperity, leading to immense popularity with the common folk.

Priscilla preaches only to make the country hers, and to own everything and everyone. As she is naturally lucky, she believes she is chosen by destiny to rule over all of Lugnica. She also pledges to gift her supporters and to listen to her subjects.

Little is known about Emilia's origins. She is arguably the most disliked out of any of the candidates, not due to her policies, but mostly due to her personal qualities, notably the fact that she looks exactly like the Witch of Envy.

Emilia's only real goal is to become queen so that she has access to the Dragon's blood, which would aid her in freeing the frozen elves in Elior Forest. Her stated goal is to create a society in Lugnica where everybody is treated equally, with respect to identity, which comes from the discrimination she's faced as a half-elf in a world that only sees silver-haired half elves as the epitome of all evils. Emilia isn't a particularly exceptional candidate, but her real magic is in the people who surround her, who've managed to overcome any obstacle without any real casualties. In particular, her knight, one Natsuki Subaru, seems to be even luckier than Priscilla, always possessing incredible foresight and consistently leaving potentially fatal situations completely untouched.

In the aftermath of an incident taking place in the Lugnica city slums, Felt was discovered to be the final, missing candidate in the royal selection. Bearing red eyes, fair skin, and golden hair, Felt, who has no official origin story, uncannily resembles the members of the deceased Lugnica family. Her candidacy was revealed at the very last moment before the start of the opening ceremony to the shock and awe of everybody in the room.

Felt's platform is to destroy the country, or at least the current system that maintains the country. She is fundamentally anti-establishment as a result of her upbringing. Her adoptive grandfather, unknown to everybody, happens to be a former leader in the civil war against the Lugnican government, which may or may not contribute to her attitude. Felt is also a little girl too, being 15 and the youngest and least accomplished of all the candidates. Of course, she has the least vested interest in governmental affairs. Her entire campaign opening speech was met by fear and abhor by the nobles, and if it weren't for the fact that she was divinely chosen to participate, she'd have been executed for treason. Fortunately, her benefactor just happened to be the Sword Saint, Reinhard van Astrea, the most powerful man in the world.