Additional info about me[]

Hello, I'm Black Reaper Sasaki. I also go by the name of Hikki the Sage. I'm active on Discord, Twitter and Instagram, all under the same or similar aliases so drop by and say hi if you happen to see me. I also have a Reddit account that goes by the name of u/Black__Reaper, though I don't use it all that much for anime-related stuff.

Despite my overwhelming and always-expanding love for Regulus, I'd have to say Kishou Arima is my all time favourite character (across all media). You'd find Regulus not that far behind him, and the third place is a tie between Reinhard and Haise Sasaki (yep, that's the reason why I go by the name of Black Reaper Sasaki). Honestly, Haise is way more developed, so I'd have to say Haise takes my no.3 spot. In case Graced is reading this, Furuta is around my 5th place, only being bested by the aforementioned Special Class Investigator, Sin Archbishop, Associate Special Class Investigator and the Sword Saint.

I love cats, my favourite time of the year is winter, I prefer cold weather over warm weather, I'm fluent in English, my native language, I'm learning Italian in school (though I'm not that good at it) and I've been studying Japanese on and off (I can read Hiragana and Katakana but nothing more than that, heh...). I do play games as well. The last game I was head over heels for, was Skyrim. A fantastic game, the more I played it, the more I fell in love with it. Having said that, my all-time favourite game is most definitely Call of Duty Black Ops 2 though Red Dead Redemption and Skyrim aren't that far behind.

Following May 10th, I have also started being very active on Choujin X Wiki as Ishida Sui is my favourite mangaka of all time. I definitely do not plan on forsaking the Re:Zero Wiki any time soon (I invested too much time into it and I still consider it to be one of the three best pieces of fiction I have ever read), but as the chapters start rolling out, I'll definitely be busier and busier over there as well. Drop by and say hi! There are some super cool guys there, like Cryonites! Lastly, I don't know if I'll become an admin there as well. I'll definitely try my best and if I'm given the chance to become one, I'll definitely say yes.

As you all can see, I'm a hardcore Regulus fan. And I will strive to add as much Regulus info as humanly possible. So please look forward to new Regulus info! I sure as hell am hyped. Overall, let's just make this Wiki as chalk-full of info as we can!!!

3: Oboreru IF story (Wrath IF)

7: Ayamatsu IF story (Pride IF)

8: Tsugihagu IF story (Gluttony IF)

A couple of theories I find interesting[]

A couple of predictions[]

A couple of my favourite illustrations[] 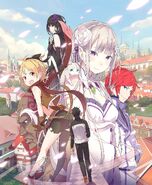 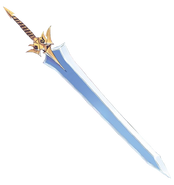 I want a Regulus x Reinhard fanfic. If you write it, please send me the story. I'd be forever grateful to you.

Community content is available under CC-BY-SA unless otherwise noted.

Ranked #2
on this wiki