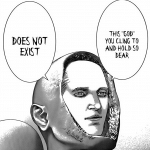 aka the editing atheist

I am OnePieceNation (OPN for short) and I am admin on such wiki's as Hunterpedia, Gantz, Bakuman, History's Strongest Disciple Kenichi and my own Anime Database wiki. In 2013 I was pretty depressed, after dropping out of school and in that year I watch 256 different pieces of anime. So after this absolute glut of anime, I was kinda done with it. I watched some animes now and then, some movies here and there. But mostly I just focused on watching a buckload of tv series. Now starting last year I got back into watching anime I was familiar with or had started like Gintama and Naruto then this year I finally got back into the swing of watching many different anime's I had never seen before. First I started with some of the most recommended ones, KonoSuba, Overlord, Food Wars, Trigun, One Punch Man, Cowboy Bebop, My Hero Academia and Violet Evergarden. Then I found out about the upcoming Isekai Quartet chibi series. That to me seems to be trial run for a cinematic isekai universe and two of the series I had already seen where involved. So naturally I watched Youju Senki/Tanya last week and just now I finished marathoning Re:Zero and to my surprise it is the best of the four. Closely followed by Overlord and Tanya with KonoSuba being a bit lackluster compared to the other three.

Retrieved from "https://rezero.fandom.com/wiki/User:OnePieceNation?oldid=52309"
Community content is available under CC-BY-SA unless otherwise noted.