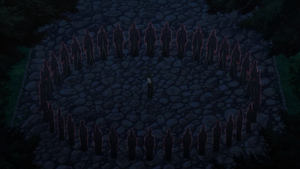 The Witch Cult (魔女教) is an organization that allegedly worships the Witch of Envy. It was co-founded by Petelgeuse Romanee-Conti, alongside another unnamed individual.

The Witch Cult has existed for over 400 years since the times when the witches were active. It is shrouded in secrecy and mystery thus little is know of the organizational structure and other specifics like their doctrine beyond rumors as a result. They are evil enough that knights are ordered to annihilate them immediately should they appear. Followers are elusive, their means of hiding unknown, allowing them to survive until the current time. Their purpose is rumored to be the resurrection of the Witch of Envy.

100 years ago, the Witch Cult consisted of a moderate side, led by Petelgeuse Romanee-Conti, and a radical side, led by Regulus Corneas. The two factions seemed to have been in a rather hostile relationship to each other as they entered an all-out combat during the attack on the Elior Forest.

The Witch Cult is a secret organisation in Re:Zero world, shrouded in utmost secrecy and ambiguity. It exists for well over 400 years, originating from the times when the Witches were freely roaming around the world. They seemingly operate at random, appearing out of thin air and causing damage of catastrophical proportions. They're always seen wearing jet black clerical robes with triangular hoods which have two red cutouts for the eyes and a large red symbol resembling an eye, located on their forehead. Each individual can also be seen wearing the Cult's coat of arms around their neck which takes shape of twin gold swords crossing each other on a red background, surrounded by a gold circle. They don't speak and show just the bare minimum of movements, effectively giving off a sense of distortion and abnormality; almost like a group of walking dolls. That being said, we know of some cases when regular members of the cult made their appearances as normal citizens or merchants and even interacted with Subaru and other members of the main cast.

Their numbers are unknown, just like their ultimate goal. They usually launch attacks in smaller groups, resorting to ambushes rather than outright announcing their attacks, which allows them to quickly dispatch several times larger and more skilled groups than theirs, with relative ease and minimum causalities; that being said, normal members of the Witch Cult are as expendable as the lowest ranking members of the Imperial Army. They often employ suicidal tactics, lunging themselves towards an enemy just so one would manage to avoid the incoming attacks and land a single killing blow. As opposed to their leaders, the Sin Archbishops, regular members also don't appear to be as mentally damaged and unstable, in some cases even showing some prejudice and fear when being subjected to tantrums and outbursts of anger from the likes of Sloth and Greed, respectfully. While we don't know if there are designated groups working under each of the Sin Archbishops (apart from Sloth), they do acknowledge them with the highest level of respect and are very often employed by them, even used as sacrificial pawns.

As mentioned above, Petelgeuse was the only known Sin Archbishop who organised and led a larger force, totaling a couple of hundred members. To keep their element of surprise, the Cultists were split into ten groups, each harboring about twelve members with "a finger" or ringleader being put in charge of the group. These so-called fingers were physically stronger than normal Cult members, being capable of taking on Rem solo and fighting on pretty much equal grounds. The fingers' main purpose however, was to serve as spare bodies for Sloth, in case his main body was slain. Accordingly, all 10 fingers had to be Spirit Arts users and were given a small part of the Witch Factor of Sloth through a complex ritual which allowed Petelgeuse to continue using Sloth when in their bodies. After the events of the 3rd arc, all surviving fingers were slaughtered and "opened up" by Sirius who was searching for Petelgeuse's spirit, effectively marking the end of Petelgeuse's faction.

The Cult is made up of followers at the bottom and a group of members at the top known as Sin Archbishops (大罪司教). The Sin Archbishops each govern over one of the seven sins other than envy that the other six witches were said to represent. They are selected based on whether they are compatible with Witch Factors, and currently only the representative for pride is said to be vacant. Also, each member owns a book known as the Witch Cult's Gospel (魔女教徒の福音), which shows the members a route to a future they desire through vague details. These books can only be read by the holder and appear to be incomprehensible to others. Despite their recent appearances in the Kingdom of Lugnica, the cult is actually active throughout the world with members spread out across various countries.

Regular cult members are often known to commit suicide when faced with the prospect of capture, by using mana stones embedded in their bodies to trigger poisons to keep information about the cult from leaking out. This makes them notoriously difficult to take alive without risks. Petelgeuse's fingers are an exception as they have an explosion ritual instead that only activates when they kill themselves in an effort to take out all nearby enemies with them when Petelgeuse needs to swap to a different body.

The executives of the cult who function as the organization's leaders and use unknown forbidden powers. They have somehow inherited powers of the "witches of old" called an Authority which they brandish at their pleasure and for the goals of the cult, effectively becoming their modern day equivalents. However, they all detest each other and rarely work together without their orders coinciding with their respective gospels.

Their appearances are rare but when they do show up, disaster always struck. Out of all the Sin Archbishops, two stood out the most; Sloth and Greed. Sloth was the most active Sin Archbishop, noted to be responsible for more than half of the Witch Cult related attacks across the entire continent. In terms of reliable records, Sloth was also the most prevalent with Julius remarking almost all the info they have about the Cult is somehow tied together with Sloth. Greed on the other hand, was associated with few calamities but the damage done by him was like no other. He rarely appeared but when he did, cities burned and causalities were extremely high. Perhaps his most notorious appearance was 15 years ago, when he single-handedly conquered a heavily fortified Vollachian city of Garkla which was (at the time) housing thousands of soldiers and the Vollachian hero Kurgan.

Retrieved from "https://rezero.fandom.com/wiki/Witch_Cult?oldid=98251"
Community content is available under CC-BY-SA unless otherwise noted.